For many years, Ballistic United offered Developmental Academy teams up through the Under-15 age group.

If the players wanted to continue playing at an accelerated level, Ballistic worked on sending players on the clubs with older age DA clubs.

One of those clubs was the De Anza Force in the south bay. Kamron Crow and his older brother Kellen – the sons of Ballistic Technical Director Kevin Crow – both donned the colors of Da Anza in their later youth soccer years.

Over the last three years, Ballistic has added older teams, completing the process this season with an under-19 team as the club enters the debut season of the MLS Next league.

As Ballistic is just adding an under-19 team, there are three former Ballistic players on the De Anza U-19 roster. One, Shane de Flores, has signed with Stanford.

The connections built between the two clubs makes it perfect that two of their respective teams will meet in the inaugural MLS Next match for the clubs.

Friday night at 7 p.m. at Patelco Park in Pleasanton, the two under-16 sides will meet.

The clubs are two of the top organizations in Northern California and have sent numerous players on to play college soccer, as well as the professional ranks, both in the United States and other countries.

The ties that were built between the two clubs have kept on through this season. 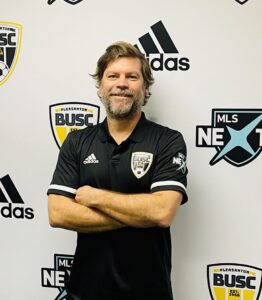 The coaches for the two Under-16 teams – Eric Denton for Ballistic and Rusty Johnson were teammates at the University of Santa Clara in the late 1990’s and were on the field together when the Broncos made a run all the way to the National Championship game in 1999, falling 1-0 to Indiana in the title match.

“He always believed in me and encouraged me, while we both held each other accountable,” said Johnson of Denton. “In the end, he helped me to be a better leader as it was intimidating having such a good defender in my back line.”

Denton gives much of the credit for the 1999 Santa Clara season to Johnson.

“He and I shared some amazing experiences on the soccer field (and off!),” said Denton. “If it weren’t for his considerable talents as a goalkeeper, where he saved my bacon a time or two on the field, we wouldn’t have made our run to the Men’s College Cup Final Four and National Championship match my senior year.”

A bond was built that exists today.

“I’ve been great friends with Rusty since we played together at Santa Clara University,” said Denton. “We’ve actually become closer friends once we both were out of school.”

“Off the field, Eric was very protective of his teammates and created an atmosphere on our team that lives on today in the banter and chiding of our group text,” Johnson said.

Johnson will not be on the sidelines on Friday night as his wife is schedule to give birth Friday, but he is so pleased to see his former college teammate coaching locally.

“I was really excited to see Eric start coaching in the area, and to have his journey finally coincide with mine and to now be able to compete once again, is amazing,” said Johnson. “I guess since I am having a baby, I will have to look forward to our next meeting.  I wish Eric, and all the boys the best in this MLS Next opener on April 9th.”

“He’s an incredibly hard worker and possesses a tremendously outstanding aptitude in all that he does,” said Denton of Johnson. “He’s also a terrific leader.”

There is a good chance Paul Bravo – the Director of Coaching for De Anza – could be on the sidelines Friday in place of Johnson.

Bravo, the former San Jose Clash and Colorado Rapids player, was an assistant coach of the California ODP state team when Denton was playing.

“I remember Paul for being one of the first coaches in my development that taught me and shared the situational nuances of the game that only a high-level player is able to relate for you,” said Denton. “I was fortunate to have been coached by Paul, and then played and competed against Paul in MLS. Paul also helped me during his time in the front offices of the LA Galaxy and then the Colorado Rapids when I was trying to get looks at those clubs.”

Bravo is glad to see where Denton is now after watching him play.

“It was great to see him play in MLS once he was drafted and highlighted my evaluation of him in as a top young player growing up in Nor Cal,” said Bravo. “It is great to see him giving back by coaching and adding his experience and expertise to the players at BUSC. The connections through the years are what it is all about and I look forward to seeing him on the sideline. Those connections go beyond myself, but to Eric Yamamoto who is our 19’s coach and Rusty Johnson who is our 16’s coach. Both coached Eric at SCU.”